The Runner cannot use AI programs to break subroutines on Swordsman.

Writing a program that can pass the Turing test is easy. The Gibson-Akamatsu test is a higher bar, and the only AIs to clear it thus far have been the androids. Even some humans have been known to fail.
Jinteki • Adam S. Doyle • System Core 2019 96
All sets:
Links: Decklists | ANCUR 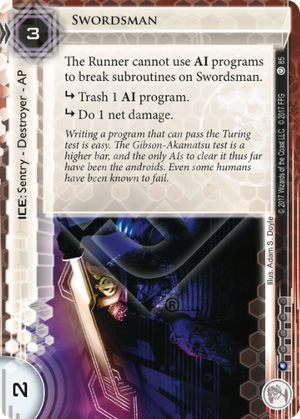 With Eater coming out next year, you will likely be seeing many more of these. Against non-Eater decks, this card is similar to a Data Mine but more expensive and can be broken more easily. Personally, as a primary Jinteki player, I will definitely use more of these in my deck.

(All That Remains era)
GreedyCuttleFIsh 14
4

Anarch has some very nice AI breakers now with Eater out. They weren't really hurting for them before with Darwin and Knight. Also considering Atman and Crypsis and this card just got a lot more relevant.

Throw a Sub Boost on one of these. As long as you're busting up their AI you might as well end the run also.

For corps that are tired of getting their Ice walked over by AI breakers Swordsman may seem really exciting at first glance. At 1 influence this seems like an easy splash for any faction and also an easy include for Jinteki as well.

In practice Swordsman does not deliver. Against decks that do not use AI breakers, Swordsman is a 3 to rez Str 2 Sentry that says: Do 1 net damage.

But what about decks that do use AI breakers? In almost every case they will be escorted by Mimic, Mongoose, Faerie, Femme Fatale (to target Tollbooths etc.), GS Shrike M2 or some type of Parasite/Datasucker insta-kill combo. In the very rare cases where you can actually land the "Trash 1 AI program." sub they will be recovered within a turn or two using Clone Chip, Test Run, Special Order, Déjà Vu or some other type of recursion. However even if you manage to kill the AI breaker, you will not have ended the run. Not ending the run can be a big deal if they land an Account Siphon or multi-access.

A good, cheap counter to the ever-popular Atman+Datasucker combo. It becomes even better if your opponent was relying on the two exclusively as their primary breaker. At one influence, it is also a good card to splash into other, non-Jinteki decks as a way to counter, but has low overall strength.